Home » The Taliban in power
‘Taliban’, the movement of religious students, appeared on the political and military scene in Afghanistan in 1994. Within two years, the movement gained control over all of southern Afghanistan, and in the autumn of 1996 the Taliban took the capital, Kabul.

The movement explained its success by pointing to its orthodoxy, sense of justice, courage and piety. Analysts, however, agree that their military triumphs were primarily due to Paki­stani and Saudi Arabian support.

In the five years when the Taliban controlled Kabul and most of Afghanistan, the move­ment became infamous for brutal suppression of women, barbaric punishments, absurd bans on music, kite flying and songbirds, for the destruction of Afghanistan’s cultural heritage, for massacres on prisoners of war and civilians – but also for cre­ating peace and security in the controlled areas. 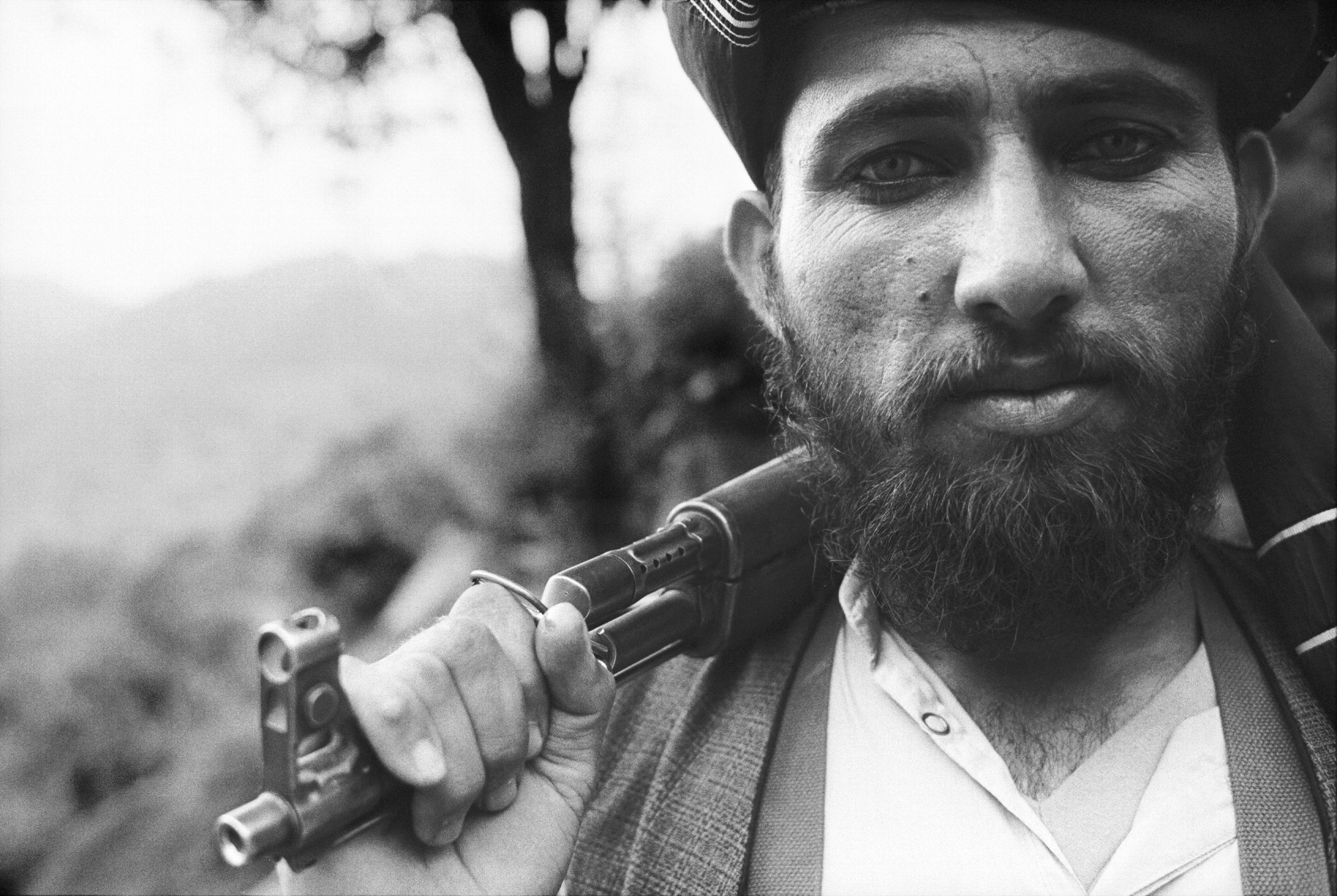 28-year-old Taliban guard at Khost. Like most Talibs, he grew up in a ‘madrassa’, an Islamic religious school. Photo: H.C. Jacobsen, 1997

The origin of the Taliban is not well understood. The movement itself refers to selective, if not mythical, presentations of the historical facts concerning the conquest of Kandahar in 1994.

According to the myths, Mullah Omar assembled a group of religious students to liberate the war weary population from corrupt resistance leaders. One of the first achievements of the Taliban was to send in a lightly armed group to free a girl who had been kidnapped and abused by a local commander. After that, increasing numbers of volunteers rallied around the move­ment, which quickly seized power in Kandahar.

The stories about orthodox, incorruptible and pious religious students give this Pash­tun movement its religious legitimacy among the southern Afghan Pashtun, who see the Taliban as ‘God’s invincible warriors’.

Observers explain the initial Taliban victories with reference to massive support from various institutions in Pakistan and economic aid from Saudi Arabia.

The use of pickup trucks gave the Taliban unique mobility on the miserable Afghan roads. It allowed them to launch rapid surprise attacks when local commanders could not be bribed or threatened into capitulation.

ISI supported the Taliban in the hope that the movement would create a peaceful Afghani­stan, capable of acting as a reliable ally in Pakistan’s conflict with Hinduist India. A peace­ful, safe Afghanistan could also stabilise Pakistan’s economy by increasing opportunities for trade with Central Asia.

The Taliban acquired men via the Islamic parties in Pakistan, who considered the Taliban a just alternative to corruption and inefficiency. The parties run Quran schools, ‘ma­drassas’, from where the Taliban recruited the majority of its soldiers. In the Quran schools, Afghan boys from the refugee camps were taught a fundamentalist understanding of Islam and elementary skills in the use of arms.

The powerful regional smuggler mafia probably also supported the Taliban finan­cially, not least to ensure its own freedom of movement and protection from local gangs of robbers on the Afghan roads. 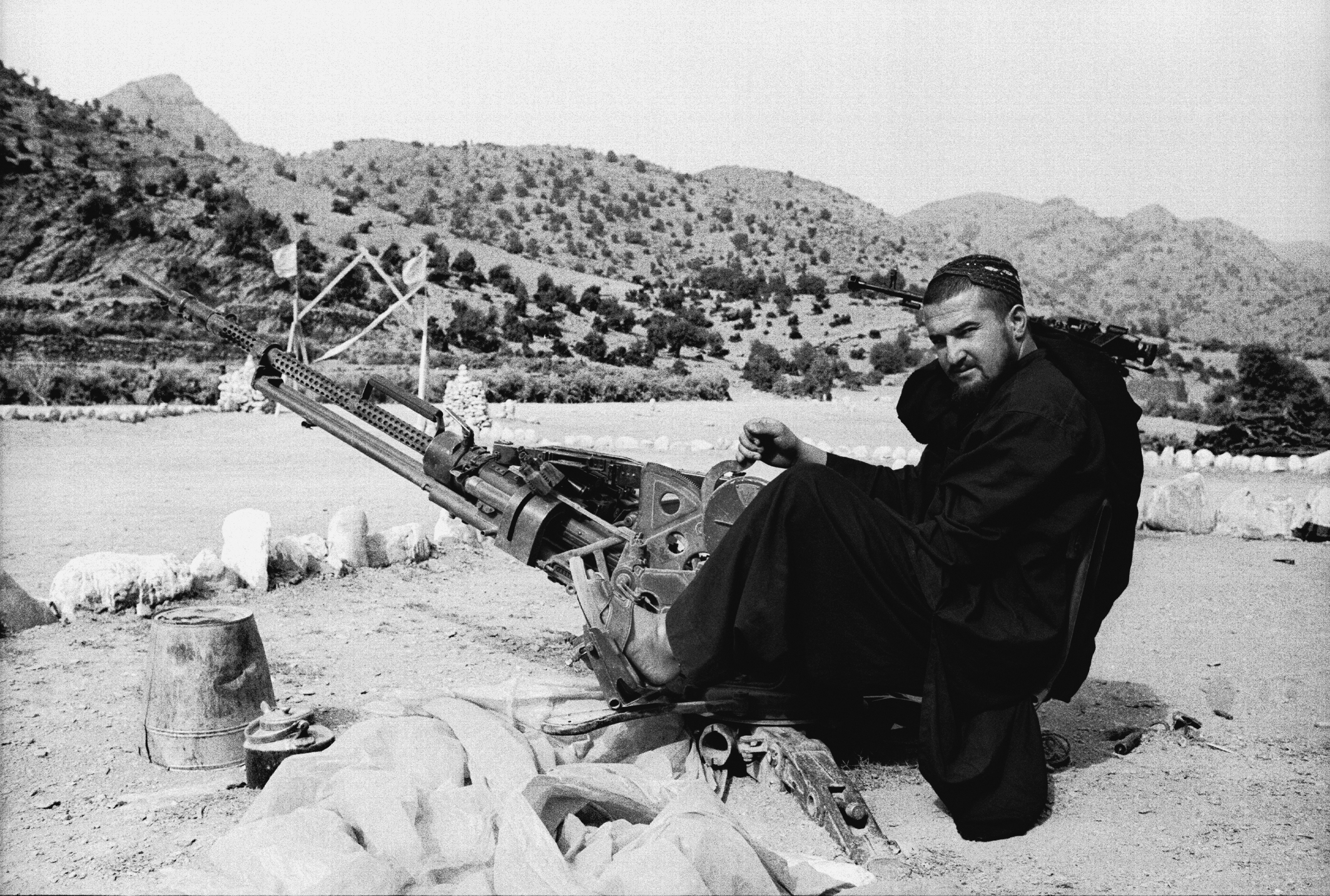 Taliban guard posing for the photographer by a roadblock at Khost. According to himself, he has been at the front 20-30 times. Photo: H.C. Jacobsen, 1997

“The Department for the Promotion of Virtue and Prevention of Vice”

Before the Taliban seized Kabul in 1996, the movement declared that its sole intention was to establish peace and safety until a legitimate government could be installed.

But such promises not to take political leadership were soon put to shame. The political ambi­tions of the Taliban were clearly expressed when Mullah Omar claimed religious author­ity as ‘Amir al Mumi’nin’ – the leader of the faithful.

As soon as the Taliban had taken the capital, they began to close the remaining girls’ schools and to issue decrees curbing women’s freedom to appear in public. To enforce this, and the many other prohibitions against kite flying, songbirds, cockfights, clattering women’s shoes, short beards and ‘Titanic hair’, the Taliban established a special religious police called “The Department for the Promotion of Virtue and Prevention of Vice”. The common city population, however, found the prohibitions absurd and ridiculous and met the religious police with fear and silent contempt.

The Taliban and the USA

Until 1996-’97, mutual understanding marked the relationship between the Taliban and the USA. The American government for instance supported an American oil company in its plans to build an oil and gas pipeline from Turkmenistan via Afghanistan to Pakistan.

After 1996, the American government – under pressure from feminist groups in the USA – began to criticise the Taliban for offences against human rights. In 1998, following the terrorist at­tacks on the American embassies in Kenya and Tanzania, the USA tried in vain to make the Taliban hand over Osama bin Laden. Subsequently, the US launched cruise missiles against presumed Osama bin Laden training camps in East Afghanistan.

After the terrorist attack on the USA on September 11th, 2001, the US intensified its pres­sure on the Taliban, which still refused to hand over bin Laden.

On October 7th, the culmination came as the interna­tional alliance against terrorism initiated aerial bombardments of the presumed hideouts of the Taliban and Osama bin Laden in Afghanistan.

The fighting con­tinued for a while around Kandahar in the south and Kunduz in the north, but it was clear that the Taliban had lost its grip of the country. Power was instead, following the Bonn Agreement in 2001, handed over to a transitional government in which several members of the Northern Alliance held central positions.