Home » Life in the countryside ­­– the grinder
Baba Zahir supports a family of eight with a grindstone and a bicycle wheel. He is one of Afghanistan’s many rural poor. However, new schools and roads seem to promise a better life for the next generations.

Baba Zahir lives in a small village in the mountainous province of Bamiyan, central Afghanistan. He is a grinder and makes his living by going from village to village with his knife-grinder, sharpening knives, axes, scythes and other tools. “Actually, this ‘charkh’ provides for my entire family,” he says, pointing to his homemade grinder. 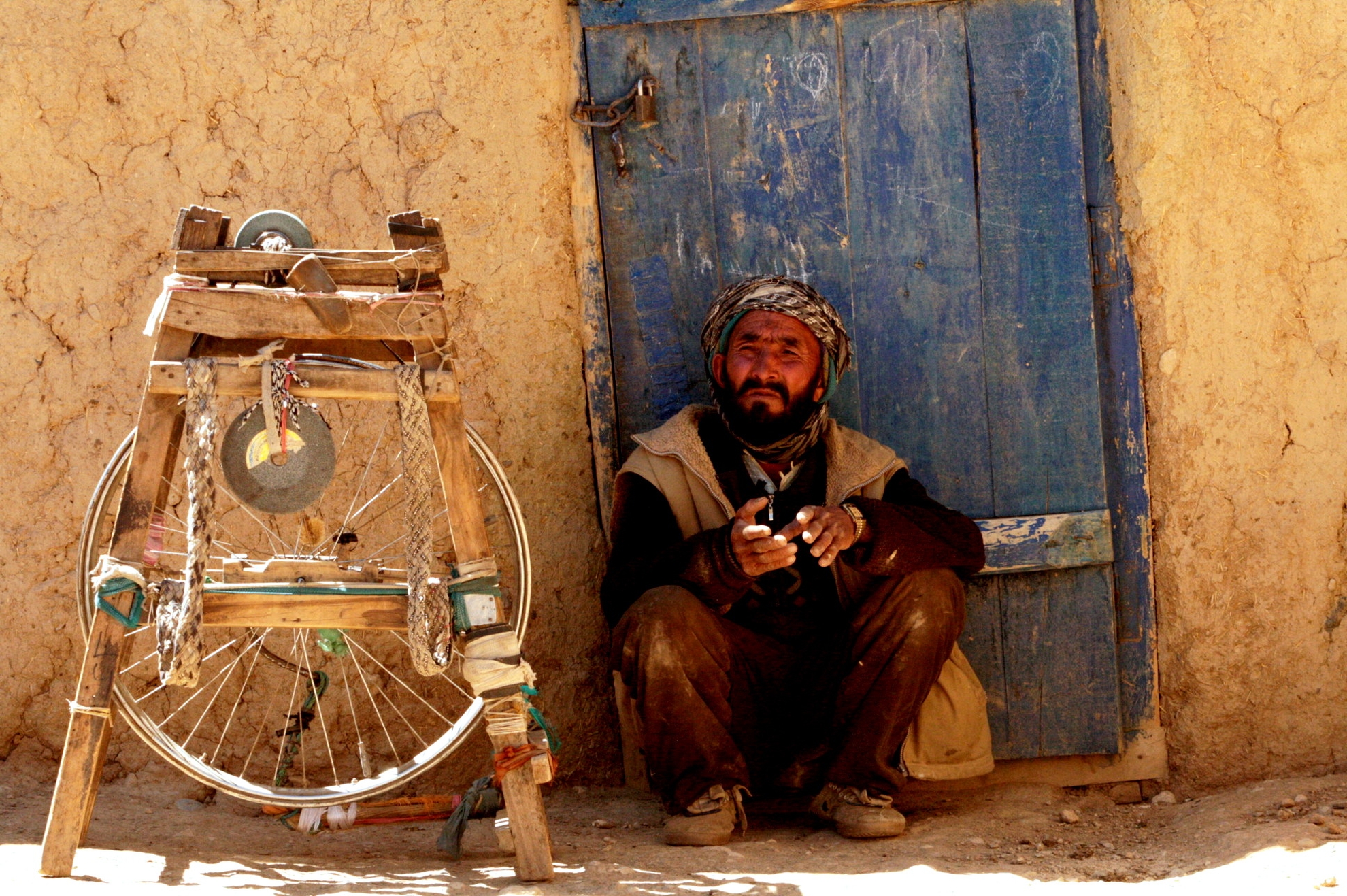 Baba Zahir in front of his house with his charkh. Photo: Tahir Bakhtiary

60 percent of the country’s workforce is employed in agriculture – for the most part as smallholders and subsistence farmers.

More than one in three Afghans live below the poverty line. Most of them are rural poor.

In addition, the rural population is often excluded from basic services – Afghanistan is, for instance, among the countries in the world with the most limited access to electricity.

For generations we have been peasants, and unfortunately we will remain peasants for generations to comeBaba Zahir
The charkh consists of a grinding stone and a pedal attached to a bicycle wheel. When Baba Zahir steps on the pedal, the  wheel makes the grindstone turn. For each knife he grinds, he earns 10 Afghani – less than 0.2 US$. On a good day he can earn up to three US$.

Baba Zahirs family consists of himself, his wife and six children.

“We are very poor, so we all need to work together – otherwise it’s difficult to survive“, he explains.

The oldest son is 14 years old. He goes to school in the mornings, but in the afternoons he is out looking for firewood for the stove.

The second son is 10 years old and the village herdsman. He is in charge of approximately 100 animals. At sunrise, he takes his animals to the mountains, and at sunset he returns to the village. He is paid in food and occasionally he receives articles for the household, but he does not earn money. Only Baba makes money in this family. 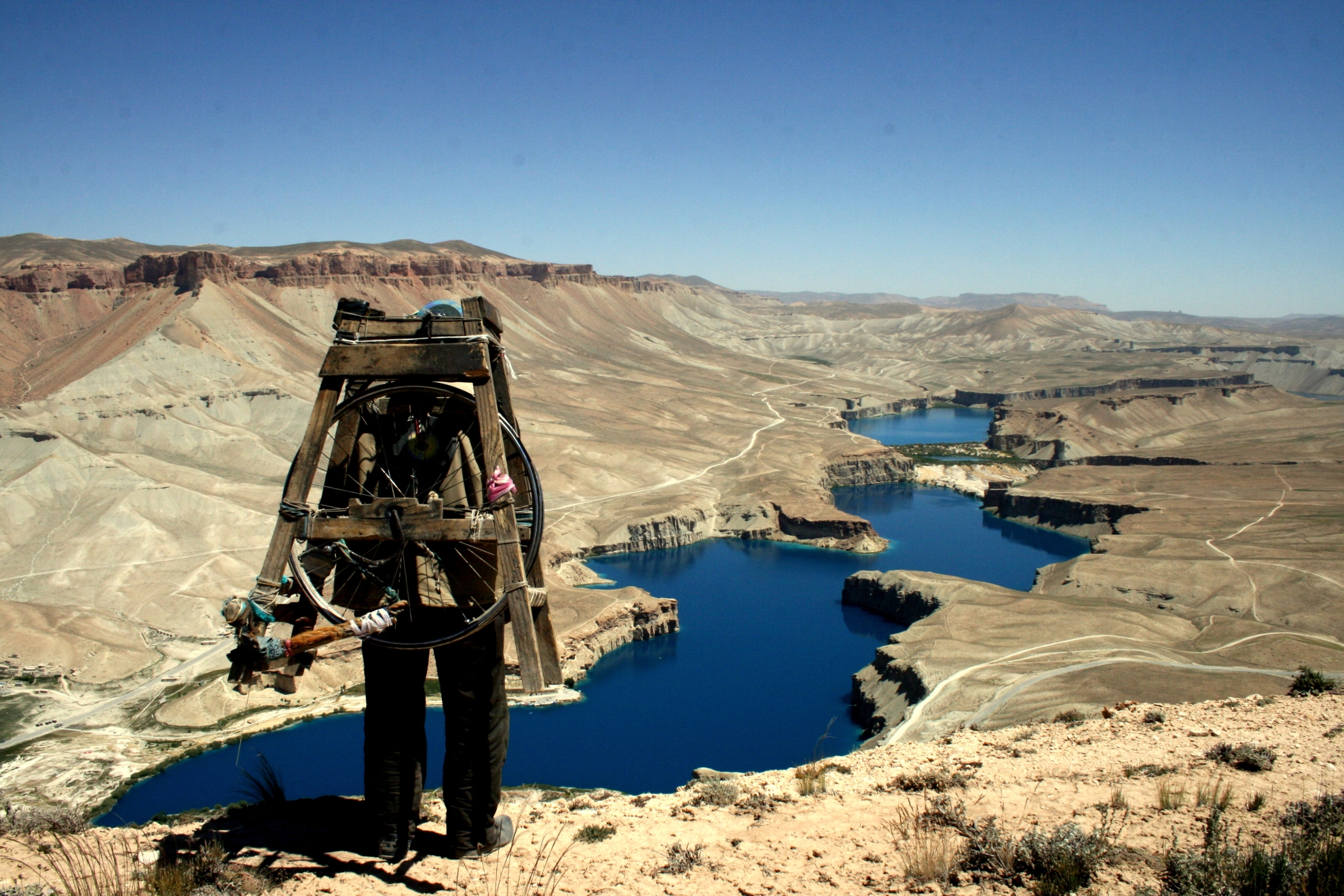 It saddens Baba Zahir that his children must spend so much time working instead of going to school:

“That’s the problem with living in the countryside here in Afghanistan,” he says. “For generations we have been peasants, and unfortunately we will remain peasants for generations to come. Still, living here also has its advantages, so there’s hope for the future.”

From shovel and bucket to pen and paper

Baba Zahir’s optimism is not ungrounded: The number of Bamiyan children going to school is increasing, particularly as regards girls. Girls did not go to school when the Taliban was in power, but today they make up about half of public school students. Almost 40 percent of teachers are women, and the same goes for about 15 percent of Bamiyan University students.

In addition, Bamiyan is among the most peaceful provinces in the country. It is off the beaten path, and neither the Taliban nor other criminal groups want to travel there.

“Luckily, we’ve had peace for years because we’re isolated from the big cities. There are no struggles or war here. That’s good, one thing less to worry about. Now we can think of the future, think of how our children can grow up with pen and paper in their hands, rather than with shovel and bucket like their parents“, says Baba Zahir.

A female governor and a road from Korea

Another piece of good news is the improved roads which Bamiyan’s governor, Habiba Sorabi, has fought for since she was elected in 2005. Baba explains that poor infrastructure was formerly a major problem for the villagers, forcing them to be entirely self-sufficient for long periods of time:

“The roads to the major cities have been in a poor condition and ruined by the war. Especially in winter, we have often had to provide for ourselves without any exchange of goods or money with the big cities. We do this by keeping livestock for meat, milk and eggs. We gather fuel for the stoves and hay and grain for the animals and store it for the winter. We knit our own clothes and repair and reuse our old things.”

Sorabi is the first female governor in the history of Afghanistan, and Baba Zahir thinks that she has done well:

“This road underneath us is brand new and made by Koreans, but it is Sorabi’s insistent struggle that has improved our transportation situation. This makes it a little easier and faster to do business with the big cities around us,” he says.

Then Baba Zahir starts walking towards the city, his grinder on his back. 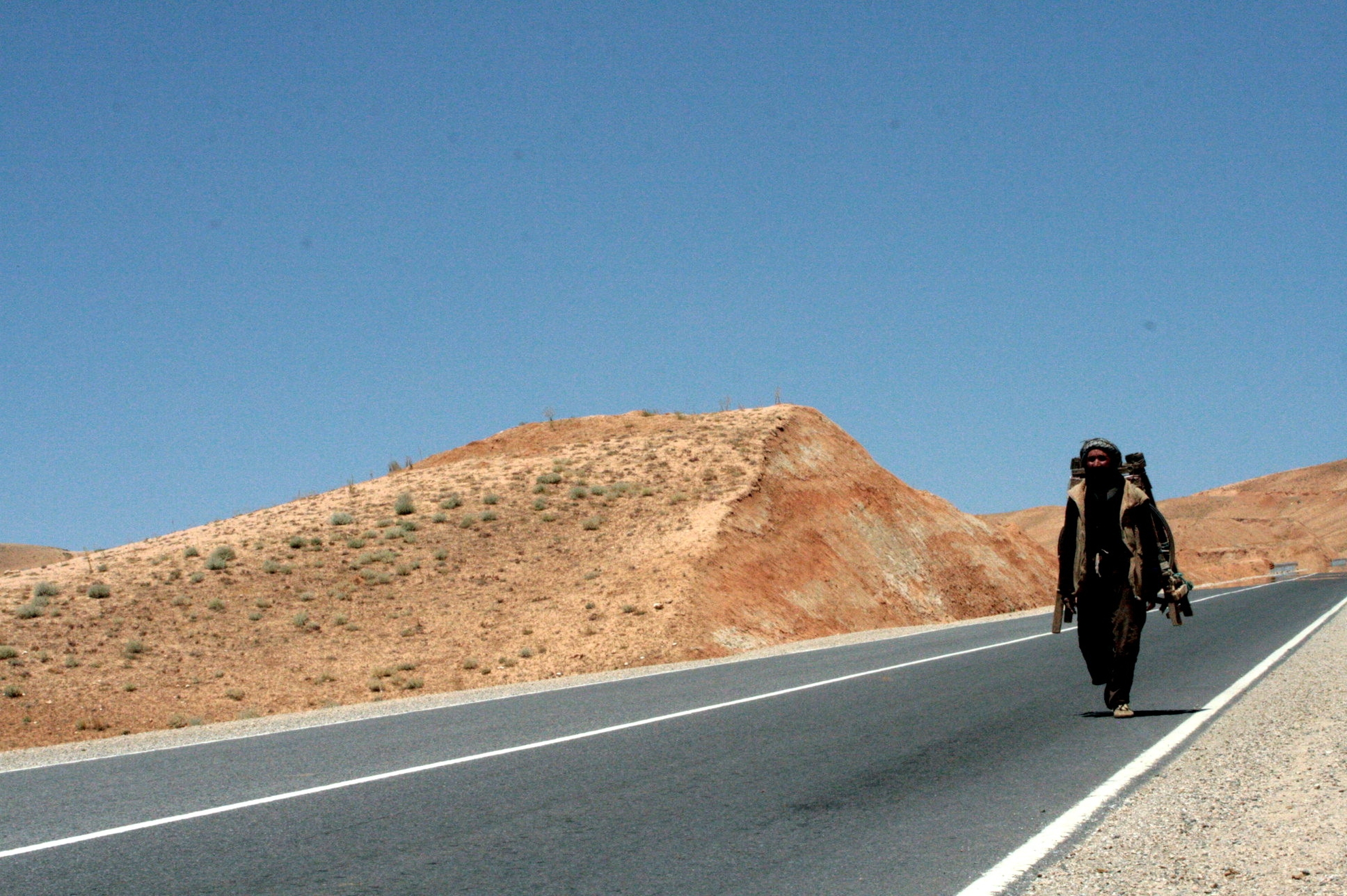